As a part of the Observatory on Land Artificialization, the French National Institute of Geographic and Forest Information (IGN) is producing a data repository to describe land cover and land use according to the OCS GE nomenclature (Large-Scale Land Use). To accelerate the production and updating chains of these data, IGN relies on artificial intelligence and is launching its first challenge on November 21st for a period of 4 months on the CodaLab.org platform, which is specialized in hosting scientific challenges. 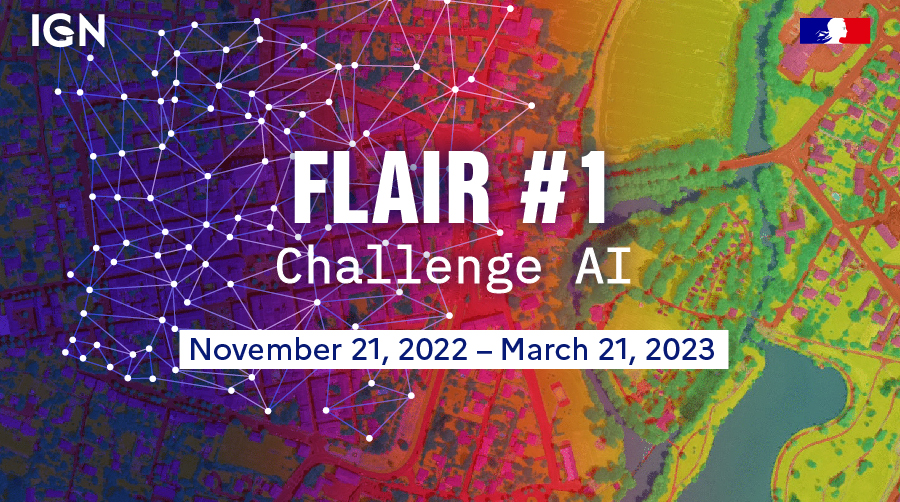 Titre
The 1st challenge of artificial intelligence for land-cover : FLAIR-one

In order to map the occupation of the entire French territory, IGN has created the FLAIR (French Land cover from Aerospace ImageRy) dataset, one of the most important datasets at an International/European level to train artificial intelligence models for the production of land cover maps.

An unprecedented size and quality dataset

With data acquired over 50 departments and more than 20 billion annotated pixels, this dataset represents the diversity of the metropolitan territory, its climates, ecosystems and soils, in order to produce large scale mapping. Various IGN databases (BD Ortho, RGE Alti) as well as annotations manually produced by expert photo-interpreters have been assembled to allow the training of AI models.

Although the methods produced at IGN have provided very good results, there is still a need to improve the models for some classifications. For this reason, IGN launched FLAIR-one on the 21st of November 2022, a 4-month scientific challenge hosted on the Codalab platform. The aim is twofold: on the one hand, to limit confusion between difficult classes and, on the other hand, to increase the model’s capacity for spatiotemporal generalization and pixel classification, regardless of the geographical area and the date of the aerial imagery.

For each participant, the IGN data is made available and the code used to train AI land cover models is open in order to be reproducible. The data will be accessible by registration only during this period. To reward the participants, €10,000 will be shared between the first three ranked (1st - €5,000 €, 2nd - €3,500, 3rd - €1,500).

As a part of an open science and geocommons approach with the opening of its data, IGN will organize several challenges to conduct a technology watch to remove technological and technical barriers, and federate a community.

You would like to participate or relay this challenge? Go to CodaLab.org !

If you have a question, or encounter a technical problem, you can write us at ai-challenge@ign.fr